The final General Assembly of PanCareSurFup, PanCare’s first consortium, was held in Erice, Sicily in conjunction with the PanCare meeting to celebrate the 10th anniversary of the Erice Statement.

Erice is a stunning village of medieval houses, churches and monasteries perched 700  metres above the Mediterranean on Sicily’s north coast.  The church of San Domenico has been transformed into a state of the art conference venue.  The PanCareSurFup General Assembly meeting took place in the basement conference room.  The consortium were able to take our coffee breaks in the stunning upper floor with a stupendous view.  As part of the closing meeting, PanCareSurFup Coordinator Lars Hjorth was presented with a special Sicilian pottery piece by Riccardo Haupt to recognise Lars’ achievement in keeping the consortium on track for six years. 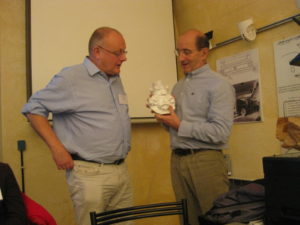 Determinants of ototoxicity in 451 platinum-treated Dutch survivors of childhood...