Anna presented PanCareLIFE at the Young Investigators Educational Day (08 October, below), including an overview of the project and the work done so far on fertility preservation guideline development. It was the first time that the SIOP conference included a programme of sessions  aimed at young investigators working in paediatric oncology and this was organized by the SIOP Young Investigators Commitee (SIOPYI-NET), where Anna is a board member.These sessions included lectures at the Educational Day, an Expert Lunch with 6 experts in pediatric oncology and the Junior Investigator Collaborative Event funded by the Texas Children’s Cancer and Hematology Centers, which was attended by 100 young investigators. As the feedback of all these sessions was very positive by both the SIOP Board and the attendees, SIOPYI-NET is already planning young investigators sessions at next year’s SIOP conference that will take place in Dublin (October 2016). 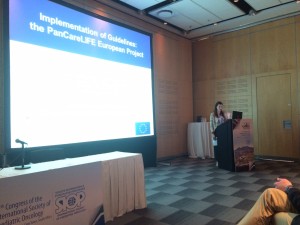 At the same meeting, Eva was presented with a Young Investigator Award for her abstract entitled: “The influence of co-medication on platinum-related ototoxicity in long-term survivors of childhood cancer: an observational DCOG study”. 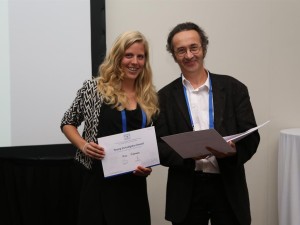